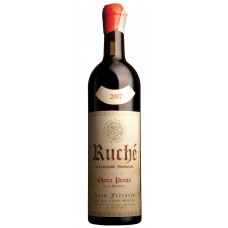 The Ruchè "Opera Prima"  is the top product from Luca, these bottles come paper-wrapped in a wooden box, with a beautiful wax-cap over the cork. The wine has 15.5% alcohol in this fabulous 2012 vintage.

Luca Ferraris wished to dedicate a memorable wine to his grandfather and winery founder, Martino, one which would stand up to years of cellaring. Opera Prima is the result of that desire.

The wine brings to mind the great Pinot Noir-based wines of Burgundy; indeed, Luca’s many trips to that particular wine area convinced him that Pinot Noir and Ruchè had much in common. So began this particular winemaking adventure, and with the assistance of his consultants, agronomist Daniele Eberle and oenologist Mario Redoglia, he set about realizing his dream.
The first step was to find the perfect vineyard, with an ideal combination of terroir, exposure, and mesoclimate that would be capable of yielding an outstanding wine. That vineyard was found in the commune of Castagnole Monferrato, on the southern hillslope of the ridge that runs from Castagnole towards Asti. The soil in that area is largely loose and rich in chalk, yet poor in nutrients meaning the vine grows with only moderate vigor. The south-facing exposure allows the vines to capture solar radiation and to produce clusters with deeply-colored, relatively small berries that contain concentrated juice.
Luca identified the vineyard back in 2005, but had to wait for the right growing year, which came just two years after the legendary 2007. Painstaking vineyard management, the search for maximum expression of terroir and the highest concentration in the fruit required, among other things, crop reduction and cluster-thinning, which lowered production to just 35 quintals of grapes per hectare.

First comes an ultra-rigorous selection of the clusters, overseen during the picking by Luca and his agronomist, and finally a long, slow fermentation in large oak botti.
Once the fermentation was finished and the wine drawn off, Opera Prima matured for 24 months in 500-litre, used oak tonneaux, so that the colour could stabilise and the tannins soften, without masking any of the variety’s character from the oak’s aromas. Nothing was left to chance, not even the aging location: an ancient cellar cut into the tufo that has belonged for generations to the Ferraris family, where the temperature remains constant throughout the year.
Continuous tastings carried out by Luca and the oenologist allowed them to pinpoint the perfect moment to bottle this family jewel, as Luca loves to call it. The bottled wine was then given a further 12 months’ aging before release, the bottles resting on their sides in the dark and at cellar temperature, optimizing its quality, and ensuring Luca’s laborious, painstaking efforts would be rewarded.
The name “Opera Prima” was selected for this Ruchè di Castagnole Monferrato precisely because the it communicates the fact that this is a new way to produce Ruchè, a Ruchè of the absolutely highest quality, dedicated to the most demanding palates. The unique expertise of the producer in understanding the terroir and the Ruchè grape has succeeded in making Opera Prima a unique and inimitable wine.