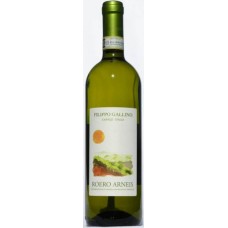 The Arneis grape is autochthon to northern Piedmont, and makes some of the most enjoyable white wines in this region. It’s boasting of ripe pears, chamomile, and white flowers. Arneis wines can be "big whites" that sometimes resemble reds due to their structure, they are highly aromatic, with relatively low acidity.

The Gallino winery was the first winery in Piedmont to make a 100% varietal Arneis wine in 1972, and they won numerous awards for their Arneis wines.

The wine is a great aperitif on its own, matches well with starters and light meats, but even better for any seafood dish.

An unusual white from a rare grape, for a fantastic price.