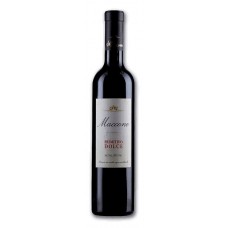 Primitivo (also known as Zinfandel) is a variety of black-skinned wine grape that produces wines with a extraordinary high amount of dry extract. DNA fingerprinting has revealed that Primitivo is genetically equivalent to the Croatian grapes Crljenak Kaštelanski and Tribidrag, as well as to the Zinfandel variety grown in 10% of Californian vineyards. The grape found its way to the United States in the mid-19th century, where it became known by variations of the name "Zinfandel", a name which is probably of Austrian origin. The more detailed relationship between Primitive and Zinfandel is described very well in this article:

The grapes for Maccone Primitivo are carefully selected by hand so that only the perfectly ripe berries and selected, in a semi-dried state close to raisins, which gives this wine a particularly soft texture. Made from Primitivo di Gioia del Colle 100% from the location Acquaviva (clay soil), from vines with an avarage age of 60 years!

The grapes undergo gentle grape pressing, maceration with submerged cap fermentation at controlled temperature for 10 days and racking. Aged in steel and placed on the market six month after bottling.