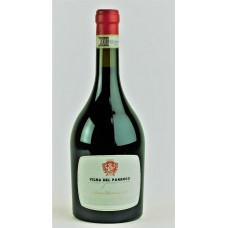 A rare wine from the original 1.4 hectare priest’s vineyard of Ruche - now available from LUCA FERRARIS at WineProvisionShop!

An iconic, yet approachable wine with soft tannins and a very aromatic bouquet.

In the glass, VIGNA DEL PARROCO takes attention to its colour, ruby red with light violet reflexes that turn, with aging, in a more orange hue. The bouquet, enduring and persistent, is characterized by a remarkable aromatic perception, melting the scent of purple and pink canine.

Appreciate this wine for notes of ripe plum, blackberries, raspberries and black pepper blend with a velvety wrap-around feeling for his soft taste and balanced body, good intensity and length of flavour. Equipped with low acidity, high alcoholic strength and a long aromatic finish.

“God forgive me” – Don Giacomo Cauda used to say in his last years of life – “for having sometimes neglected my ministry to devote my energies to the vineyard. After celebrating the Mass, I used to change my clothes quickly, and climb on the tractor. But I know that God has forgiven me, because with the money earned from the wine I created the oratory and renovated the rectory. “

The father of Ruchè, the first to believe in the potential of this grape for the production of a varietal dry wine, the first to vinify and sell it in bottle was a parish priest. He was called Giacomo Cauda and, long before the advent of the DOC, that wine was known as Ruchè del Parroco. "May God forgive me - said Don Giacomo Cauda in his last years of life - for having sometimes neglected my ministry to devote my soul and body to the vineyard. After the Mass, I got changed quickly and sat on the tractor. But I know that God has forgiven me because with the money earned from the wine I created the oratory and renovated the parsonage ".

Don Giacomo, born in 1927, arrived in Castagnole Monferrato as a parish priest in 1964. Born in Roero, Don Giacomo did not know the Ruchè but was immediately struck by that grape with a pleasant and refined taste, so much that he tried to make wine in purity and his first experiment produced the beauty of 28 bottles! Here began his long adventure as a “winemaker priest”, who gave his territory notoriety and fortune. Thanks to his determination, his beloved wine received the DOC in 1987. In 1993, now an old man, he gave the ownership of the vineyard «vigna del parroco» to one of his parishioners: Francesco Borgognone. Meanwhile, in 2010 the Ruchè di Castagnole Monferrato becomes DOCG. In 2016 Borgognone, who became an old man himself, sold the vineyard with its old vines to the young producer Luca Ferraris, also from Castagnole Monferrato.  Vigna del Parroco is now the flagship wine of the company and the flag of Ruchè in the world, in memory of a brave and far-sighted country priest, who in his modesty loved to repeat: "I'm just a man, a poor priest. The success I had is not mine, but of who inspired my work from above. So many times I thought, 'Who makes me do it?' But inside me I knew the answer. "

VIGNA DEL PARROCO BETWEEN THE 75 FINEST WINES IN THE WORLD

Decanter has drawn up its "The most exciting wines of 2017", asking all its contributors to select the wines they have most enjoyed during 2017, under a stipulated price of 55 euros. The three judges have tasted and valued 173 wines from 20 different nations.